The Blue Ribbon Campaign was initiated in 2013 as part of the initiative of the Malaysian Health Promotion Board (MySihat) to recognize and honour the significant roles played by individuals, organizations and institutions in advocating a 100% smoke-free environment in both indoor and outdoor areas in workplaces, restaurants or hotels.

Currently, there are more than 300 premises recognised as smoke-free through the Blue Ribbon Premises Certification.  The role of media is honoured through a media award for raising awareness on the harmful effects of smoking and exposure to secondhand smoke.  An outstanding achievement and special award were given to individuals, groups, institutions, communities, government agencies and other stakeholders who have shown excellence in tobacco control leadership.  MySihat was also actively promoting and supporting the smoke0free cities initiatives in Malaysia, particularly in Melaka, Johor, Pulau Pinang, Kelantan and Terengganu.  At present, around 33 smoke-free zones have been gazetted in these 5 states between 2011 and 2017 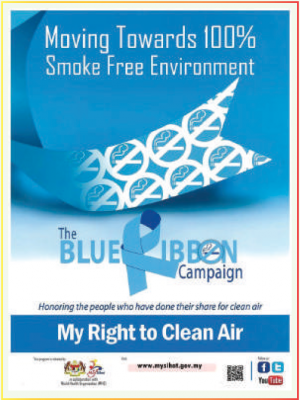 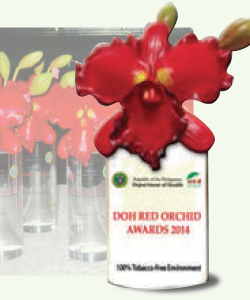 The DOH Red Orchid Award is the first of its kind in the world.  It aims to advocate and promulgate DOH Administrative Order 2009-0010 and Civil Service Commission Memorandum Circular No. 17, dated May 29, 2009 on the 100% smoke-free environment policy and pushing for full implementation of World Health Organization’s Framework Convention on Tobacco Control (WHO FCTC).

The awards started in 2010 to give recognition to 100% tobacco-free cities, municipalities, government offices and health facilities that are strictly enforcing tobacco control measures.  The DOH Health Promotion and Communication Service manages the awards.